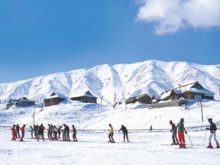 In 2018, Kashmir reportedly witnessed the lowest ever tourist footfall in the last seven years, recording only 8.5 lakh domestic and foreign tourists visiting the valley in total. This was a decline of about 23 per cent from 2017, which saw around 11 lakh tourists visitors to Kashmir. Zahoor Qari, Chairman—TAAI, J&K Chapter, said that the figures are by and far correct, and blamed the decline to negative media coverage about the state on electronic channels. “The decline in the number of tourists to Kashmir is because of the uncertainty projected by electronic media around the country. The smallest of incidents in the remotest part of the state is being highlighted in the media, which is not even close to the tourist sites in the valley. This works against the tourism in the state.”
Despite actively participating in multiple travel trade shows around the country and abroad, the state witnessed the low visitor numbers. The tourism department also undertook many promotional initiatives in 2018 to boost the numbers. Qari said, “We even arranged a Fam trip for the media to Kashmir, but that also did not work. Instead, there was negative coverage on mainstream channels about Kashmir.”