Indonesia teams up with MakeMyTrip to promote tourism

In an aim to tap more potentialities from the Indian tourism market, the Indonesian government held a two-day tourism promotion event at Ambience Mall, Delhi from December 9-10, in partnership with MakeMyTrip. “India is part of the ultimate tourism markets for Indonesia. Not only Bali, we would also promote other destinations across Indonesia for potential Indian tourists throughout the event,” said I Gde Pitana Pitana, Deputy Minister for International Marketing Development at the Ministry of Tourism, Indonesia. According to Pitana, the arrival figures of Indian tourists to Indonesia have grown significantly to 357,522 in the first nine months of this year, or 31.07 per cent higher than the figure in the same period of last year. The event was expected to help the Indonesian government to achieve its target of 456,000 Indian tourists this year, Pitana added. Source: Xinhua

UP to host International Conclave in Lucknow from Feb 20, 2018 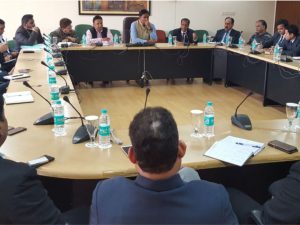 With an aim to promote the tourism avenues of Uttar Pradesh in the world, Government of Uttar Pradesh is set to organise International Conclave from February 20-22, 2018 in Lucknow. A meeting of stakeholders chaired by Akhand Pratap Singh, IAS, Special Secretary, Department of Tourism, Govt of UP & Managing Director, UP State Tourism Development Corporation Limited was held on November 29 at Paryatan Bhawan, Lucknow. Surendra Kumar Jaiswal, President, Uttar Pradesh Hotel & Restaurant Association (UPHRA) who is also Hony. Secretary of FHRAI and HRANI along with fellow hoteliers and stakeholders attended the meeting to discuss the roadmap of the event. 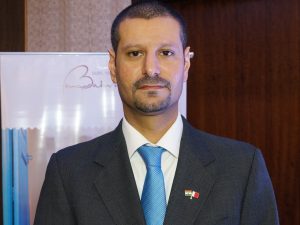 Bahrain Tourism and Exhibitions Authority hosted its first roadshow in India in Mumbai at the St Regis Hotel. Around 18 delegates including Bahrain Tourism officials, Bahrain’s leading hotels and destination management companies participated at the event. Yousef Mohammed AlKhan, Director of Tourism Marketing & Promotion, Bahrain Tourism & Exhibitions Authority said, “We are here in India to showcase Bahrain offerings in Mumbai and Delhi to tour operators and travel industry. We have had got good growth from the India market this year. We have been witnessing an increase in tourist numbers from India as compared to last year. We are also working closely with Gulf Air to increase the numbers from India. 2018 will be a crucial year for us as we are extremely focused on the Indian market now.” Currently, Bahrain Tourism is looking to tap cities where they have direct flights after which they will focus on other Indian cities. The destination also showcased new products at the roadshow like pro diving and water sports activities, adrenaline sports like indoor skydiving, cultural and historical offerings for Indian tourists.

The 6th International Tourism Mart (ITM) organised by the Ministry of Tourism in association with the North Eastern States begins in Guwahati, Assam. Jagdish Mukhi, Governor of Assam in the presence of Sarbananda Sonowal, Chief Minister, Assam; K J Alphons, Minister of State (I/C) for Tourism, Rashmi Verma, Union Tourism Secretary and other dignitaries from Central Ministries and North Eastern States inaugurated the three-day event. Besides foreign delegates, 50 domestic stakeholders and 103 sellers from the North Eastern States are participating in the Mart. Representatives of State Tourism Departments of North East States will also showcase their tourism destinations. Held from December 5-7, the event will put the spotlight on India’s ‘Act East Policy’, blossoming ties with ASEAN and the larger East Asia region, home to the world’s rapidly growing economies. The panel discussions will also focus on promoting cultural ties, people-to-people contact with countries in the ASEAN region providing enhanced connectivity to the States of North Eastern Region, thereby developing inter-regional tourism between the ASEAN and North East Region of India. ITM – 2017 will also see an active participation by the Ministry of DONER to synergise the process of development of tourism of the North East Region.

2nd edition of Travel Business Show kicks off in Gurugram 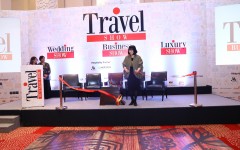 The 2nd edition of Travel Business Show, an exclusive MICE event, was held from December 2-3 at Le Meridien Gurgaon. The show was inaugurated by MA Teresita C. Daza, Ambassador of the Philippines to India, who was also the chief guest for the evening. Tourism and MICE continues to be a great contributor to the economy of nations, Daza said. “In 2016, the Philippines economy grew by 6.8 per cent, faster than 5.9 per cent expansion in 2015.  In the third quarter of 2017, it grew by 6.9 per cent. The top source markets for the Philippines from Asia include China, Japan, South Korea and Taiwan. Currently, India ranks as the 12th largest source market for the Philippines. Many Indians visit Manila, Cebu, Palawan, Angeles and Boracay,” she informed. Giving an insight in the popularity of the Philippines as a destination for Indians, she added, “In 2016, the record of Indian arrivals in the Philippines was 90,000, which is an average of about 246 Indian passengers per day.  This number of Indian arrivals is very encouraging, despite visa requirements for Indians travelling to the Philippines.” On the visa policy, she informed, “To provide better visa services to Indian travellers, the Philippines has already instituted a 14-day free visa for Indian nationals, who are holders of  visas for USA,  Japan, Australia, Canada, Schengen, Singapore and the UK, from all international airports and seaports of the country.”

The Ministry of Tourism in association with the North Eastern States is set to organise the International Tourism Mart (ITM) in Guwahati, Assam from December 5-7, 2017. The event will be held at Taj Vivanta, and will be inaugurated by Jagdish Mukhi, Governor of Assam in the presence of Sarbananda Sonowal, Chief Minister, Assam and K J Alphons, Minister of State (I/C) for Tourism, along with other dignitaries from Central Ministries and North Eastern States. The 6th ITM will focus on India’s ‘Act East Policy’, blossoming ties with ASEAN and the larger East Asia region. Besides deliberations on promotion of tourism in the North East Region, the panel discussions will also lay emphasis on promoting cultural ties, strengthening contact with countries in the ASEAN region and providing enhanced connectivity to the North Eastern states. The ITM 2017 will also see an active participation by the Ministry of DONER to synergise the process of development of tourism in the North East region. 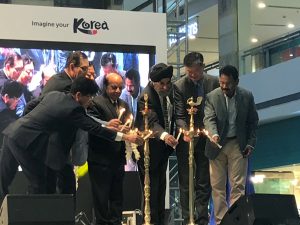 Ambience Mall, Gurugram played host to a two-day Korea Festival showcasing South Korea’s art, culture and heritage for the visitors to the mall. Organised by (KTO), the event was targeted to the consumers and had a separate stall where travel partners for KTO also showcased their itineraries and travel products to people. The event was inaugurated by Min Hong Min, Executive Vice President, KTO and Suman Billa, Joint Secretary, Ministry of Tourism, Government of India. The event also saw high energy B-boying performances and Nanta performance by professionals flown in from South Korea, especially for the event. 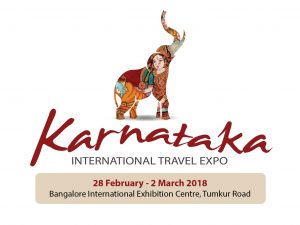 The Government of Karnataka, Department of Tourism, announced the inaugural edition of ‘Karnataka International Travel Expo’, in Bengaluru from February 28–March 2, 2018. The inaugural edition of ‘Karnataka International Travel Expo’, is set on a B2B platform with over 400 registered buyers and media from over 25 countries exploring business opportunities for discerning travel and tourism products, which will make the event one of the most sought-after travel events in the country and enhance the marketing efforts of the state to promote Karnataka as a destination which is diverse, fascinating and safe. Priyank Kharge, Minister for Tourism, IT & BT, Government of Karnataka, said “Karnataka is home to a large and exciting portfolio of globally acclaimed tourism products with UNESCO World Heritage Sites, splendid wildlife and resplendent nature, virgin beaches to adorn. ‘Karnataka International Travel Expo’, being held for the first time will provide the impetus to the inbound travel and tourism industry and would enhance the marketing efforts of Karnataka Tourism to promote our destinations to the travel trade from all over the world.” The event is supported by major travel trade and hospitality associations in India such as ADTOI, ATOAI, IATO, TAAI, SKAL, FICCI, Karnataka Tourism Forum, Federation of Hotel and Restaurant Association of India (FHRAI), among others. The 2018 event will showcase both the rich cultural heritage and high-tech features of the city of Bengaluru in the state of Karnataka. “Karnataka with its diverse range of products is fast emerging as one of the most interesting and productive states for the travel trade industry both for leisure and business travel. A globalized one-stop sourcing platform is vital for stakeholders within the tourism industry to effectively reach out … 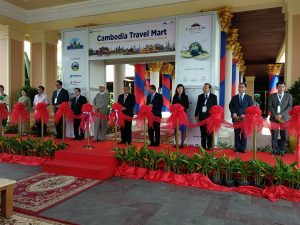 The maiden Cambodia Travel Mart kicked off at Sokha Siem Reap Resort and Convention Centre on November 17. The three-day mart, which will host local and international buyers, suppliers, trade professionals and media partners, will allow participants to meet and exchange the latest developments of the tourism industry in Cambodia. The ribbon-cutting ceremony was presided over by Yim Chhay Lay, Deputy Prime Minister of Cambodia, and Thong Khon, Minister of Tourism, Cambodia, along with other dignitaries. The tourism minister of Cambodia said at the event, “In 2016, the number of tourists visiting Cambodia increased about 5 per cent, we received about 5 million tourists. In 2017 we hope to receive 5.5 million tourists and we expect this number to go up to 7 million in 2020. The first event of CTM in Siem Reap this year is a key factor to develop tourism in Cambodia and to achieve the expected goals.” The next edition of the Cambodia Travel Mart will be held at Phnom Penh from October 11-13, 2018. 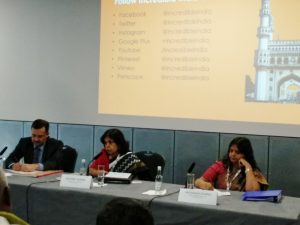 The India pavilion at the World Travel Market 2017, the leading global event for the travel industry, was abuzz with activities for the trade and consumers alike. Addressing a press conference, Rashmi Verma, Secretary-Tourism, Government of India, launched the all-new Incredible India website which will be going live from December 25.  At the three-day exhibition underway at the ExCeL-London from Nov 6-8, Incredible India showcased a lively celebration of spiritual tourism. The India stand laid special emphasis on the development and promotion of tourism for the North East States with an objective of showcasing the largely untapped tourism potential of the region. The Secretary highlighted the new initiatives for promoting tourism in India. “India Tourism has been going at a fast pace. We have jumped 25 positions as per World Tourism Forum, our ranking has improved from 65 to 40. In terms of international tourist growth in our country, last year it was 9.7 per cent as against the international trend of 3.5 per cent. This year so far it has been very encouraging and it has been at a high of 15.6 per cent. In terms of foreign receipts our growth has been commendable. The international growth has been 2 per cent, ours has been about 8.3 per cent (2016). The growth has been there but still there’s a long way to go.” Verma informed that recently India celebrated tourism fortnight with a focus on encouraging tourism. The MOT started campaigns called ‘Tourism for All’ and ‘Dekho Apna Desh’, focused on domestic tourists as well as NRIs, encouraging them to come to India not only to visit their relatives but also witness the diverse culture of the country. She pointed …