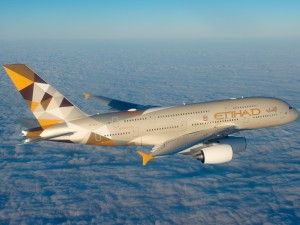 Etihad Airways will launch a fourth daily flight between Abu Dhabi and Kozhikode on 26 March 2017, capitalising on the strong traffic flows between the state of Kerala and the UAE, and beyond. The airline will also double its frequency between Abu Dhabi and Ahmedabad in the western state of Gujarat, from 1 February 2017 with the launch of a new daily service. Etihad Airways announced the expansion of scheduled services between Abu Dhabi and India as strategic partner Jet Airways unveiled new routes and additional frequencies to further strengthen their partnership. From early 2017, the two airlines will expand their services between the United Arab Emirates and India by adding 28 weekly flights and three further Indian cities. Jet Airways recently announced the launch of daily flights between Tiruchirappalli (Trichy), Tamil Nadu, and Abu Dhabi on 1 February 2017, offering travellers another option from southern India. Jet Airways will also introduce daily services from Kannur, the fourth Kerala gateway to Abu Dhabi. It also plans daily services from the northern Indian city of Chandigarh to Abu Dhabi, which will benefit travellers to and from the state of Punjab. The two routes are due to begin in the second half of 2017, subject to the completion of operational readiness at these airports. From 15 January 2017, Jet Airways will introduce a second daily service between New Delhi and Abu Dhabi. With Etihad Airways already operating three flights a day between the two capital cities, the enhanced operation will give guests a wider choice of departure times. Etihad Airways currently operates 175 weekly flights between Abu Dhabi and 11 Indian cities. Together, Etihad Airways and Jet Airways offer 252 weekly flights …

Air India Express will connect Sharjah with Chandigarh and Tiruchirapalli (in Tamil Nadu) from September. The airline will introduce three non-stop flights per week each from Chandigarh (IXC) and Tiruchirapalli (TRZ), to add Sharjah International Airport, bringing the total number of its routes between Sharjah and Indian destinations up to seven. India is one of the United Arab Emirates’ leading trade partners, accounting for some 9.8 percent of the country’s total non-oil trade, buying 14.9 percent of the Emirates’ exports and 8.7 percent of its re-exports. The total volume of bilateral trade between India and the UAE is expected to increase from $60 billion in 2014 to $100 billion by the year 2020. India is also the largest single origin of investors for Sharjah’s Hamriyah Free Zone and Sharjah International Airport Free Zone (SAIF Zone). Air India Express has been expanding its services to destinations in the UAE, including daily Mumbai-Dubai, Mumbai-Sharjah, New Delhi-Dubai and New Delhi-Abu Dhabi routes, which it added earlier this year. According to the airline, the number of its weekly flights between India and the UAE increased from 107 flights to 146 flights per week before the summer. The low-cost airline currently operates five routes with a total of 15 weekly flights to Sharjah International Airport. Air India Express now flies direct to Sharjah from Kochi (COK), Kozhikode (CCJ), Mumbai (SAHAR), New Delhi (DEL), Thiruvananthapuram (TRV) and Varanasi (VNS. India is well connected to Sharjah, with Sharjah-headquartered Air Arabia operating flights between Sharjah and 13 Indian destinations. Jet Airways, India’s second largest airline, operates direct daily flights on Sharjah-Kochi and Sharjah-Mangaluru (IXE) routes.