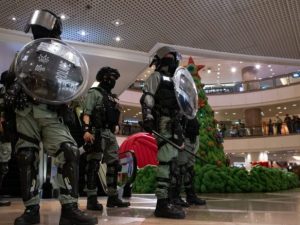 Hundreds of protesters marched through Hong Kong shopping malls on December 26, disrupting business in the Asian financial hub for a third day over the festive period and prompting the riot police to close off a mall in a tourist district. The “shopping protests” have targeted malls across the Chinese-ruled city since Christmas Eve, turning violent at times with the police firing tear gas to disperse demonstrators in areas filled with shoppers and visitors. Some restaurants and stores pulled down their shutters in the malls as protesters, some wearing balaclavas and carrying black flags, marched by. The protests began more than six months ago in response to a now-withdrawn bill that would have allowed extraditions to mainland China, where courts are controlled by the Communist Party.