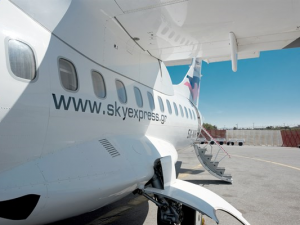 Aviareps has been appointed by Sky Express to represent the Greek domestic airline as its General Sales Agent (GSA) in eight markets around the world including Australia, Canada, France, Hong Kong, India, Italy, Spain and the United Kingdom. The appointment, made with immediate effect, is the result of the airline’s initiative to expand its sales and marketing outreach internationally to travellers and travel industry leaders in key strategic markets. Operating out of its three domestic hubs of Athens, Thessaloniki and Heraklion in Crete, Sky Express connects travellers to 29 major tourist, cultural and business centres throughout Greece including Santorini, Mykonos, Rhodes, Milos, Paros, Naxos, Kos, Mytilene, Ikaria, Zakynthos Kythira, Chios, Karpathos, Syros and Skyros to name a few. The fleet, which consists mainly of ATR aircrafts, is available for scheduled and charter flights, for individual passengers or groups. All Sky Express passengers departing from Athens or Thessaloniki are also provided free access to Business Lounge facilities. 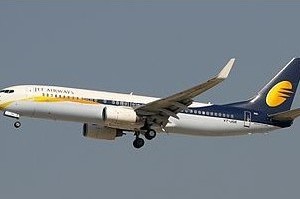 Jet Airways has expanded the scope of its popular eduJetter programme for upcoming 2017-18 academic year. The revised program will make it easier for Indian students and those from Sri Lanka, Bangladesh and Nepal – holding confirmed admissions for studying at universities/ institutions in Australia, Canada, Europe, Hong Kong, Malaysia, New Zealand, Singapore, United Kingdom, and the USA, to commence their new academic journey. Effective this year, privileges include special baggage allowance of up to 69 kg, free SIM cards (with exclusive calling rates), and through baggage check-in up to the final destination. Participating students also receive a free ISIC Forex Card  that offers easy and safe access to foreign exchange besides enjoying a five per cent discount on JetEscapes Holidays. Jet Airways has also simplified the entire process of eduJetter application and booking, as part of widening the appeal of the programme. The new, automatic application process is user-friendly and allows students to apply in three steps – book a flight ticket, visit the EduJetter page on the Jet Airways website to fill an online request form. The student then receives  an updated ticket from the airline with applicable eduJetter benefits within 72 hours. Commenting on the programme and its enhancements, Jayaraj Shanmugam, Chief Commercial Officer, Jet Airways said, “Jet Airways  has always endeavored to provide exceptional value to guests by way of special programmes and partnerships. EduJetter is one such initiative that offers tremendous value to the student community travelling abroad for higher education from India, Sri Lanka, Bangladesh, and Nepal, in the form of a bouquet of services that have been specially created by anticipating their needs at this significant moment in their life.” 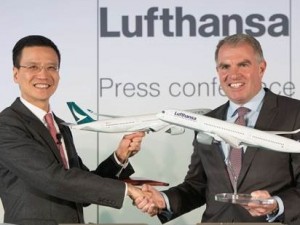 Cathay Pacific Chief Executive Ivan Chu and Carsten Spohr, Chairman of the Executive Board and CEO of the Lufthansa Group, signed a new co-operation agreement that will see the airline code share on flights operated by Lufthansa, Swiss and Austrian Airlines to a number of destinations in Continental Europe. Reciprocally, the Lufthansa Group will codeshare on Cathay Pacific services to four of the airline’s most popular destinations in Southwest Pacific. Under the agreement, Cathay Pacific will offer 14 new destinations in Germany, Belgium, Hungary, Norway, Italy, Switzerland and Austria with the “CX” code placed on the following services operated by airlines in the Lufthansa Group. The Lufthansa Group will place its airlines’ codes on services operated by Cathay Pacific between Hong Kong and Auckland as well as between Hong Kong and Cairns, Melbourne and Sydney. Under a single booking, passengers from Frankfurt, Munich, Vienna and Zurich will be able to check through and seamlessly transfer to their final destination in Auckland or Australia via Hong Kong International Airport. The agreement extends to both airlines’ frequent flyer programmes. Tickets for the new code-share destinations will be available for sale from 5 April 2017 for travel commencing from 26 April 2017. 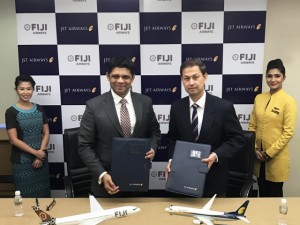 Jet Airways and Fiji Airways, Fiji’s national airline, have announced a codeshare partnership which offers guests travelling on both carriers seamless connectivity between India and Fiji via Singapore and Hong Kong. The codeshare agreement, a first-of-its-kind between the airlines of the two countries, will address the growing demand for travel between India and Fiji. Codeshare bookings are now open for sale for travel effective March 09, 2017. Jet Airways will place its ‘9W’ code on Fiji Airways’ flights from Singapore and Hong Kong to Nadi, and Fiji Airways will place its ‘FJ’ code on Jet Airways’ services between Singapore and Mumbai, Delhi and Chennai as well as between Hong Kong and Mumbai and Delhi. All codeshare flights will allow through check-in to the final destination of any journey. What’s more, JetPrivilege members will also be able to accrue and redeem JPMiles on the codeshare flights operated by Fiji Airways flights; and the accrued miles will count towards their tier status as well. Gaurang Shetty, Whole-time Director, Jet Airways said, “Our codeshare agreement with Fiji Airways reflects our continuing commitment to the travelling public, to offer the best possible connections to more and more destinations around the world which now extends to the beautiful paradise of Fiji. Ties between the people of India and Fiji can be traced back over a 100 years and with the governments of both countries making focused efforts to further strengthen trade, tourism and cultural ties, we believe this codeshare partnership will play a pivotal role in these endeavours by enabling seamless connectivity between both countries.” Andre Viljoen, Fiji Airways’ Managing Director and CEO said: “This is a very significant achievement for both airlines. Demand for …

Cathay Pacific Airways and Dragonair have announced additional baggage allowance for students travelling from India to Hong Kong, USA or Canada. This offer is valid for travel from May 1 till September 30, 2016, and from December 1, 2016, to January 31, 2017. Students booking a one-way or return ticket on the airlines’ websites or Mobile App before June 30, 2016, in the eligible economy and premium economy class, can avail of additional baggage allowance. They can avail of additional 10 kgs baggage allowance while travelling to Hong Kong and can carry one additional piece of 23 kgs while travelling to USA or Canada. In order to avail this offer, students will need to share a copy of their university admission letter / identity card from the university, student visa copy, passport copy and ticket copy.