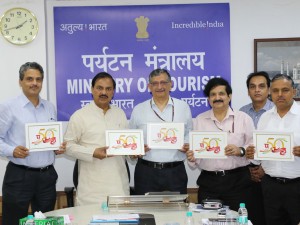 India Tourism Development Corporation (ITDC), a PSU under Ministry of Tourism, Government of India, on completion of its 50 year of inception on October 1, 2016, launched a logo marking the golden jubilee of ITDC. The logo was unveiled by Dr. Mahesh Sharma, Minister of State (I/C) for Tourism and Culture in presence of Vinod Zutshi, Tourism Secretary, and other senior officers of Ministry of Tourism and ITDC. In order to commemorate the Golden Jubilee celebrations, various activities have been introduced during the fortnight starting September 24, 2016 till October 8, 2016. Special offers on room tariff and food & beverage outlets in all ITDC hotels, issue of Elite Card to every 50th guest during this period, plantation of 50 saplings each in some hotels of ITDC, painting and slogan competition, lighting of all Delhi based hotels, presenting souvenirs to guests visiting ITDC hotels on 1st October 2016 are certain activities planned during the celebrations. 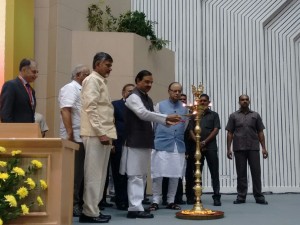 Ministry of Tourism’s maiden Incredible India Tourism Investors’ Summit 2016 kicked off in New Delhi. Arun Jaitley, Union Minister for Finance and Corporate Affairs inaugurated the three-day summit. Dr. Mahesh Sharma, Minister of State (I/C) for Tourism & Culture delivered the key address. Andhra Pradesh Chief Minister N. Chandrababu Naidu also addressed the audience on the occasion. It is an initiative of the Ministry of Tourism, Government of India, in association with Tourism Finance Corporation of India (TFCI) and Confederation of Indian Industry (CII). IITIS is a platform for domestic and international investors to meet project owners from across Indian states and the private sector. Highlights of this summit will be state presentations encompassing all investible properties, session on “Why invest in India?,” MSME in tourism sector, panel discussions on core infrastructure for tourism, session on start-ups, digital India, investing into Swadesh Darshan, PRASAD, MICE and niche tourism products, B2B meetings and signing of MoUs. Four Knowledge Partners i.e. Ernst & Young, KPMG, Yes Bank and Invest India will assist States and UTs for identifying projects, suggesting tourism policy updates and presenting these to the potential investors during the summit. Around 250 domestic and overseas investors are set to participate in the summit. More than 2000 delegates have registered for the event. 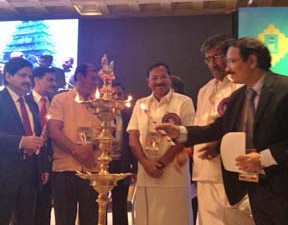 The 32nd IATO Convention was inaugurated in Chennai today in the presence of Vinod Zutshi, Secretary-Tourism, Government of India, T.K. Ramachandran, Principal Secretary-Tourism, Culture, & Religious Endowments Department, Ministry of Tourism, Government of Tamil Nadu, Thiru. Pandiarajan K, Ministry of School Education and Sports and Youth Welfare (responsible for archaeology), Government of Tamil Nadu, Thiru. Vellamandi N. Natarajan, Tourism Minister, Government of Tamil Nadu, Ashok Chandra Panda, Tourism and Culture Minister, Government of Odisha, and senior IATO officials. Pronab Sarkar, President, IATO, thanked the VIPs and the Chief Minister for having the convention in Tamil Nadu. Sarkar said, “Tamil Nadu has all the ingredients to attract tourism. Tourism is one of the major engines of economic growth in the world and has exceeded the automotive and oil industry. We organise IATO Convention to allow members to get a first-hand experience of the States and educate them about the services and offerings. I hope after this convention, Tamil Nadu will experience the growth in tourism as well.”

MOT on a cleanliness drive from Sept 16-30

The Ministry of Tourism (MOT) is observing a Swachhta Pakhwada (cleanliness fortnight) from September 16-30, 2016, to create awareness of the need for cleanliness in all walks of life. The officers and staff of MOT will undertake cleaning of 10 pre-selected tourist sites in the afternoon during this period. In addition to the cleaning, the officers and staff will carry out cleaning in and around Transport Bhawan and C-1 Hutments and weeding out of old documents and files to achieve ‘Swachh’ office environment. An essay competition on the topic of cleanliness will be organised on September 24 in English and on September 25 in Hindi. Considering the importance of September 27 being the World Tourism Day, MOT will organise a ‘Run for Swachh Paryatan from Transport Bhawan to India Gate with the participation of the public, students and faculty of the Institutes of Ministry of Tourism as well as the officers and staff of the Ministry. Awards and Appreciation Certificates would be distributed on World Tourism Day to the best maintained or cleanest offices at head quarter, regional and domestic offices of MOT to acknowledge and encourage the efforts made towards cleanliness. 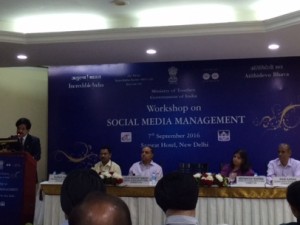 In a bid to promote Incredible India destinations on the social network, the Ministry of Tourism, Government of India has launched its account on five major social media websites, namely, Instagram, Pintrest, LinkedIn, Periscope, and Vimeo. Tourism Secretary Vinod Zutshi, along with Joint Secretary-Tourism Suman Billa and other MOT officials made the five accounts live in the presence of travel and tourism professionals, state governments and private players. Zutshi observed that the clientele involved in tourism is much more tech-savvy than any other industry. MOT wants to take a 360-degree approach to interact with consumers for which it has decided to actively leverage social media platforms, he added. He also said that it is for the first time that MOT has appointed an agency for marketing and promotion, and is developing a content sharing network with Incredible India offices and state governments. “The ministry has also kept aside a sizeable amount of budget for promotion through e-media platforms,” Zutshi said. MOT’s Twitter presence has increased by 94,000 between May-August, 2016, Billa revealed. He also called upon state governments, Incredible India offices across the country and the world, private players and tourism associations to actively participate in social media campaigns and share their high resolution images, videos and other tourism related information which can be shared on social media platforms for promoting a destination. Billa revealed that the upcoming Incredible India Tourism Investors Summit will be played out on LinkedIn in a big way to get in touch with the precise target HNI and travel trade. He also called up on tourism associations to share their new packages and workshops and live images and videos from their annual conventions with MOT so as …

The Central Sanctioning and Monitoring Committee (CSMC) for the Swadesh Darshan Scheme in Ministry of Tourism has approved projects to the tune of Rs. 450 crore for development of Heritage circuit in Madhya Pradesh and Uttarakhand, Ramayana Circuit in Uttar Pradesh, North East Circuit in Sikkim and Coastal Circuit of Tamil Nadu. The Heritage Circuit in state of Madhya Pradesh, covers Gwalior- Orchha- Khajuraho-Chanderi-Bhimbetka-Mandu with total project cost of approximately Rs. 100.00 crore. The project envisages world class infrastructural development of the sites which includes developing a Theme Park and Convention centre in Khajuraho, Sound and Light Show in Mandu. Site Illumination, Construction of Tourist Facilitation Centres and parking area are other intervention proposed in the circuit. The Heritage Circuit in Uttarakhand is on developing Tourism Infrastructure in Jageshwar-Devidhura-Katarmal-Baijnath sites with total project cost of approximately Rs. 83 crore. The highlights of project in Uttarakhand are development of Eco Log Huts, Sound and Light Show and Upgradation of Temple Pathways. Coastal circuit in State of Tamil Nadu envisages development Chennai- Mamamallapuram-Rameshwaram-Manpadu–Kanyakumari with total project cost of approximately Rs.100 crore has been approved. Sound and Light Show, development of Beach amenities, Construction of Pedestrian Bridge connecting Vivekanand memorial with Tiruvalluvar Statue are major highlights of project. Ramayana Circuit in State of Uttar Pradesh envisages development of two destinations viz. Chitrakoot and Shringverpur. The Project cost for this circuit is approximately Rs.70 crore for development of Parikrama marg, food Plaza, Laser Show, Foot Over Bridge connecting MP and UP part of Chitrakoot. Development of Ghats, Tourist Facilitation Centre and Parking area. Ramayana Circuit in Uttar Pradesh also includes Ayodhya for which the State Tourism Department of Uttar Pradesh is preparing Detailed Project …

PATA-MOT roadshow in Europe from Oct 17-27 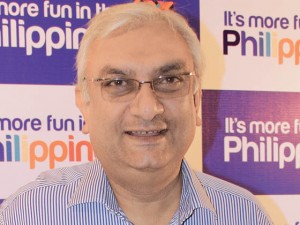 PATA India Chapter in cooperation with Ministry of Tourism, Government of India, is conducting its business development roadshows in six European cities from October 17-27, 2016. The roadshow will begin in Helsinki (Finland) on October 17, and move on to Stockholm (Sweden) on October 18, Copenhagen (Denmark) on October 20, Vienna (Austria) on October 24, Prague (Czech Republic) on October 26, and conclude in Warsaw (Poland) on October 27. PATA India Chapter’s Executive Director, Runeep Sangha, said, “PATA looks forward to carrying 15-20 sellers from India including airlines, hotels, special interest groups, and destination management companies.” The meetings aim to promote inbound tourism from these important and emerging source markets for India.

BRICS Convention on Tourism from Sept 1-2 in Khajuraho 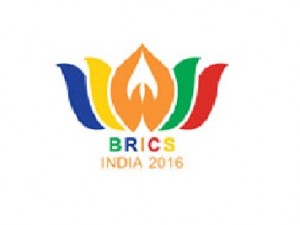 Ministry of Tourism, Government of India (International Cooperation Division) is organising the BRICS Convention on Tourism from September 01-02, 2016, in  Khajuraho, Madhya Pradesh. Delegation from the BRICS nations including Tourism Minister of South Africa is expected to participate in the Convention, which is being held as a precursor to the BRICS Summit to be held in Goa on October 15-16, 2016. The two day event will comprise of inter-governmental exchange of views and ideas, panel discussions on technology, innovation in tourism, and cooperation between the BRICS countries for promoting intra-regional tourism. B2B meetings between the India Travel Trade and their counterparts from the BRICS countries will also be organised. Elements of culture, handicrafts and cuisine from different regions of India will be showcased during the convention. The inaugural ceremony and proceedings on September 1, 2016, is being organised at the Convention Centre of Ramada Hotel, Khajuraho. Madhya Pradesh Tourism is sponsoring a gala cultural evening and dinner at Clark’s Hotel Khajuraho on September 01, 2016, for the delegates attending the BRICS convention. On September 02, 2016, panel discussions on the topics, “Cooperation among the BRICS countries for promotion of Tourism” and “Technology, Innovation in Tourism: Adapting to change” has been organised. Post-convention familiarisation tours are also organised for the BRICS delegates from September 03-06, 2016. The itineraries for the familiarisation tour would cover important tourist destinations in Madhya Pradesh, Uttar Pradesh and Bihar, which include Varanasi-Bodhgaya, Orchha/Agra, and Bhopal-Sanchi-Bhimbetka. The familiarisation tours will be hosted by the respective state governments. 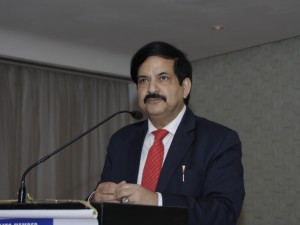 Vinod Zutshi, Secretary, Ministry of Tourism, recently visited Shanghai in a bid to attract Chinese investment in India’s tourism sector. Close to 20 prominent investors participated in the event which was a part of roadshows being conducted in different parts of the world to promote participation of investors’ at the forthcoming Incredible India Tourism Investors Summit scheduled  to be held at New Delhi from September 21-23, 2016 being organised by MOT, in partnership with Tourism Finance Corporation of India and the CII. The Summit will bring together more than 20 Indian states unveiling a large bouquet of projects close to around 1000 in number, both of core infrastructure and those specific to various themes of tourism be it hospitality, medical, MICE, Buddhist, entertainment and cruise tourism etc, the Secretary informed the Chinese investors. He also said that what makes this Summit unique is that it would see a large no of B2G meetings and states would offer single window for foreign and domestic investors interested in picking up their tourism sector projects in the true spirit of ease of doing business. Zutshi also pointed out that never was there a more favourable time to invest in India than now with strong macro-economic indicators and the current government’s commitment to investment facilitation like never before. Several members who were present from the Chinese side expressed their interest in attending the Summit in now Delhi next month and appreciated the preparation of the Indian Government in attracting Tourism specific foreign investment.