The International Air Transport Association (IATA) has shared that air travel recovery across the world continued through November 2022, with India’s domestic recovery catching up with 2019 numbers soon. “In India, domestic RPKs (Revenue Passenger Kilometers) increased by 11.1% YoY and ASKs by 0.5%. November RPKs were 12.2% short of 2019 results,” it said.

India’s domestic traffic rises to 8.9% in July compared to 8.2% in June: IATA 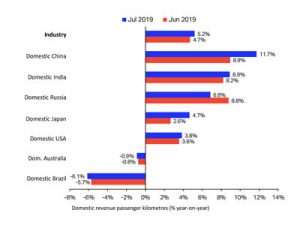 The Indian domestic Revenue Passenger Kilometres (RPK) market recorded an 8.9% annual growth rate, up from 8.2% in June, reveals IATA Air Passenger Market Analysis. The market has not yet returned to the double-digit growth rates that were the norm in the past 4-5 years. Yet it seems to be adjusting well to the disruption caused by the demise of Jet Airways; capacity is also back on track (7.1% yoy in July vs 3.4% in June).

The International Air Transport Association (IATA) announced global passenger traffic results for January 2017 showing demand (revenue passenger kilometers) rose 9.6% compared to January 2016. This was the strongest increase in more than five years. Domestic air travel climbed 9.9% in January year-on-year. India led domestic all markets in year-to-year growth for the 22nd month in a row; January traffic soared 26.6%, marking the 15th consecutive month of 20%-plus annual growth. Demand is being stimulated by strong flight frequency. Capacity increased 8.7% and load factor was 80.1%, up 0.9% percentage points. January international passenger traffic surged 9.3% compared to the year-ago period. Capacity rose 7.5% and load factor climbed 1.3 percentage point to 80.3%. All regions recorded year-over-year increases in demand led by the Middle East and Asia Pacific. Asia Pacific carriers recorded an increase of 10.9% compared to January 2016, helped by the impact of Lunar New Year-related travel and solid growth on routes within Asia. Capacity rose 8.9%, pushing up load factor 1.5 percentage points to 81.4%. “2017 is off to a very strong start, with demand at levels not seen since 2011. This is supported by the upturn in the global economic cycle and a return to a more normal environment after the terrorism and political ‘shock’ events seen in early 2016,” said Alexandre de Juniac, IATA’s Director General and CEO. IATA estimates the holiday-related travel contributed up to one-half a percentage point in extra demand growth. January capacity rose 8.0%, and load factor climbed 1.2 percentage points to 80.2%. IATA (International Air Transport Association) represents some 265 airlines comprising 83 per cent of global air traffic.

India and China continued to register double-digit growth in domestic passenger demand in September 2016, according to International Air Transport Association’s (IATA) global passenger traffic report. The results showed that global demand, measured in revenue passenger kilometers (RPKs) grew 7 per cent compared to the same month in 2015. This was the strongest year-over-year increase in seven months. Capacity climbed 6.6 per cent and load factor edged up 0.3 percentage points to 81.1 per cent. Growth in domestic traffic slightly outpaced growth in international traffic. Domestic passenger demand climbed 7.2 per cent in September as compared to September2015, which was up from the 4.1 per cent year-on-year growth recorded in August. International RPKs climbed 6.9 per cent with airlines in all regions recording growth compared to 2015. Total capacity climbed 7.2 per cent, causing load factor to slide 0.2percentage points to 80.4 per cent. “September’s growth in passenger demand was healthy. Importantly, this rebound from August weakness suggests that travel demand is showing its resilience in the aftermath of terror attacks. We must, of course, be ever-alert to the ongoing terror threat. And overall the industry is still vulnerable to being buffeted by rising geopolitical tensions, protectionist political agendas, and weak economic fundamentals. This will still be a good year for the airline industry’s performance, but our profitability will continue to be hard-won,” said Alexandre de Juniac, Director General and Chief Executive Officer, IATA.

India’s domestic air travel soared 22.9 per cent in January compared to a year ago. Growth is being propelled by the comparatively strong domestic economy and increases in air services. The Indian market overtook both Australia and Japan during 2015 and is currently level with Russia at around 1.2 per cent of global revenue passenger kilometers (RPKs). The International Air Transport Association (IATA) announced global passenger traffic results for January 2016 showing demand (RPKs) rose 7.1% compared to January 2015. This was ahead of the 2015 full year growth rate of 6.5%. January capacity rose 5.6%, with the result that load factor rose 1.1 percentage points to 78.8%, the highest load factor ever recorded for the first month of the year. Domestic air travel rose 6.8 per cent in January year-on-year. Capacity rose 5.1 per cent and load factor was 78.9 per cent, up 1.3 per cent percentage points. “January maintained the strong traffic growth trend seen in 2015, showing the resilience of demand for connectivity despite recent turmoil in equity markets.The record load factor is a result of strong demand for our product and airlines making the most productive use of their assets. Underlying conditions point to another strong year for passenger traffic, with the latestdecline in oil prices likely providing additional stimulus for air travel growth,” said Tony Tyler, IATA’s Director General and CEO. Domestic RPKs accounted for about 36% of the total market in 2015. It is most important for North American airlines as it is about 66% of their operations. In Latin America, domestic travel accounts for 46% of operations, primarily owing to the large Brazilian market. For Asia-Pacific carriers, the large markets in India, China …