According to the latest analysis from the World Tourism Organization (UNWTO), 40% of all destinations worldwide have now eased the restrictions they placed on international tourism in response to COVID-19. This latest outlook, recorded on 19 July, is up from 22% of destinations that had eased restrictions on travel by 15 June and the 3% previously observed by 15 May. It confirms the trend of a slow but continuous adaptation and responsible restart of international tourism.

UNWTO has stressed upon the need for vigilance, responsibility and international cooperation as the world slowly opens up

The world is slowly opening up again, new research from the World Tourism Organization (UNWTO) indicates, with destinations cautiously easing travel restrictions introduced in response to COVID-19. As the United Nations specialised agency releases its Global Guidelines for Reopening Tourism, signalling a transition into gearing up for stronger and better recovery, 3% of all global destinations have now taken steps to ease travel restrictions. However, UNWTO notes that 100% of all destinations worldwide continue to have some form of COVID-19-related travel restrictions in place and stresses the need for vigilance, responsibility and international cooperation as the world slowly opens up again. 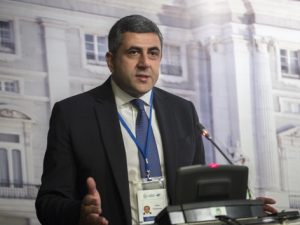 Zurab Pololikashvili, current Ambassador of Georgia to Spain, Morocco, Algeria and Andorra, has been appointed Secretary General of the World Tourism Organization (UNWTO) for the period 2018-2021. Pololikashvili’s candidature was presented by his country, Georgia, in accordance with the UNWTO statutes. He was elected by consensus at the 22nd UNWTO General Assembly being held in Chengdu, China, following the recommendation of the 105th UNWTO Executive Council. Pololikashvili was Minister of Economic Development of Georgia (2009-2010) and Deputy Minister of Foreign Affairs of Georgia (2005-2006).