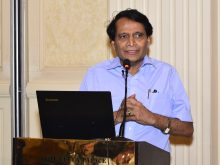 Bhubaneswar is set to get a second airport to reduce congestion at the existing one, according to the Civil Aviation Ministry. The airport registered a growth of 39.4 per cent in 2017-18 fiscal, making it one of the fastest growing airports in the country.
“Identification of a suitable land to build a second airport near Khurda on the outskirts of Bhubaneswar has been initiated. The set-up process will be fast tracked. The new airport will traffic congestion while improving passenger convenience,” the ministry tweeted.
Earlier this month, Petroleum and Natural Gas Minister Dharmendra Pradhan had urged Civil Aviation Minister Suresh Prabhu to set up a new airport on the outskirts of the city as the existing airport was nearing saturation.
“The airport, which was started in 1962, is near saturation and faces severe space and runway-related constraints. There is, thus, an urgent need to set up a new airport at Bhubaneswar given the tremendous growth potential of this smart city,” he had said in a letter to Prabhu.