Highest numbers of FTAs in India were from 35-44 years: MOT 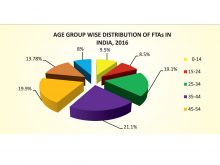 The proportion of FTAs in India has not changed much in the last few years. In 2016, the highest numbers of FTAs in India were from 35-44 years age group (21.1 per cent) followed by the age groups of 45-54 years, according to a report by Ministry of Tourism.
The proportion of FTAs for the age group of 25-34 years has been the highest from East Asia, West Asia, Africa, Eastern Europe and Central and South America in 2016,  according to a report by Minsitry of Tourism. The report also says that for Australasia, South Asia and South East Asia was the age group of 35-44 years. The percentage share of the age-group of 45-54 has been the highest for North America and Western Europe.