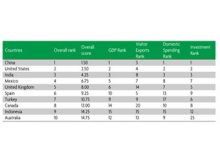 India has been ranked at the third place in WTTC’s new Power and Performance report, which looks at the performance of 185 countries over the last seven-year period (2011-2017) – after the financial crisis ended and when most countries commenced their journeys to recovery. At the first position in this list of Top 30 is China followed by USA. The countries have been ranked using WTTC’s annual economic impact data across four main indicators— total contribution to Gross Domestic Product (GDP), visitor exports (international tourism spend), domestic spending and capital investment. Countries were ranked in terms of absolute size of growth and speed of growth to create two separate types of rankings – power and performance rankings. China took the first place, driven by the strongest absolute growth out of all countries in three indicators – GDP growth, domestic spending and investment growth. The USA (with the largest total Travel & Tourism GDP) and India comfortably took the second and third place. Mexico, a well-established Travel & Tourism economy, came fourth, driven by a strong performance across all four indicators.