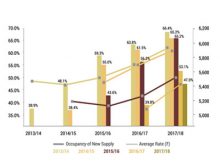 New hotels that have commenced operations over the last five years averaged 66.4 per cent occupancy last year, according to a recent study by Hotelivate. While hotels that opened in 2013-14 through 2015-16 consistently displayed stronger occupancies, it dipped slightly in 2016-17 only to show a burly rebound last fiscal. First year ARRs, on the other hand, were more a function of the positioning mix of the new supply across the five-year period. As more budget, economy and mid-scale hotels open their doors for business across the nation, it is only natural that their blended ARRs would be lower than the nationwide average. Overall, absorption of new supply has been robust in recent years and the sector displays signs of being in the pink of health.