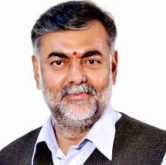 Prahlad Singh Patel has been appointed as the Minister of State (Independent Charge) for The Ministry of Tourism, Government of India. He is a five-time parliamentarian and was a front runner for Modi’s second cabinet. He also served as a Minister of State for coal in the Atal Bihari Vajpayee government. He takes over from Alphons Kannanthanam. He defeated his nearest competitor Pratap Singh of Congress with a margin of 3,53,411. Patel holds BSc, LLB, MA (Philosophy) degrees. He was also a member of Executive Council of VV Giri National Labour Institute and member of the Consultative Committee in the Ministry of Labour and Employment.