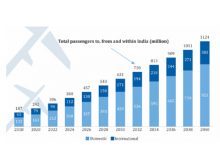 The total passenger traffic (to, from and within India) in India is expected to rise nearly six-fold from 187 million in FY2018 to around 1124 million in FY2040, according to a latest report by FICCI-KPMG titled ‘Vision 2040 for the Civil Aviation Industry in India’. This includes around 821 million domestic passengers and around 303 million international passengers (to and from India). The overall CAGR across the five clusters works out to around 9% in domestic and 7% in international traffic during FY 2018-2040.
“The FICCI-KPMG projection is higher than the projections made by leading organisations. Given the untapped potential of the Indian aviation market and the signi􀃶cant reforms being driven by the federal and state governments, we feel that the above projections are eminently achievable. These are of course predicated on the assumption that volatility in oil prices and exchange rate will be within a reasonable range and the constraints in terms of policies, taxation, infrastructure and ease of doing business shall be addressed on priority,” the report states.