Akasa Air commences its maiden flight from Lucknow, the 11th destination on its network 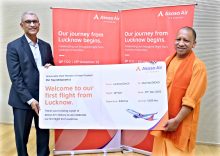 Commenting on the commencement of the first flight from the state, the Honourable CM of Uttar Pradesh, Yogi Adityanath stated, “Uttar Pradesh is one of the leading states in domestic tourism and tourist movement in India. Our state is transforming into the most preferred investment destination in India and therefore, enabling new growth trajectories for shaping the vision of a new India. Witnessing India’s newest airline, Akasa Air, starting operations in Uttar Pradesh early in their journey, reaffirms my faith in the potential of the state in generating employment and ensuring economic prosperity for our country.”

Commenting on the commencement of the maiden flight from Lucknow, Vinay Dube, Founder and Chief Executive Officer, Akasa Air said, “We are thankful to the Honourable Chief Minister of Uttar Pradesh, Shri Yogi Adityanath-ji for his support on this momentous occasion as we launch our inaugural flight from Lucknow, the 11th city in our fast-growing network. Lucknow is renowned for its rich culture, architecture, and cuisine while being a popular tourist destination, established textile and an emerging automobile hub. We believe, with the important work being done by the Honourable Minister to further boost tourism in the state, Lucknow will surely become an important part of our plans while we start today with connecting this key state capital with Mumbai and Bengaluru.”

“The Akasa story is aligned with the nation’s journey towards making air travel affordable through PM Modi-ji’s clarion call – Ude Desh ka Aam Naagrik. This launch is another extension of our efforts to boost the country’s economy by strengthening its important transportation linkages ”, he added. Akasa Air has reaffirmed its commitment to linking metros to Tier 2 and 3 cities with the addition of Lucknow as the newest destination to its network, easing connectivity to Mumbai and Bengaluru. The airline’s operations from Lucknow will cater to the rising demand for travel from the city while offering its signature warm and reliable service to passengers on the most affordable fares.

Recently Akasa Air also announced Goa as the 12th destination on its network with three daily flights scheduled on the Goa – Bengaluru route and two on the Goa – Mumbai route in January 2023. The newly inaugurated Manohar International Airport (Mopa) will facilitate the airline’s operations in the state.

Since its launch in August this year, Akasa Air has been progressively scaling up its operations and by December end expects to cross over 500 weekly flights on a total of 18 routes across 12 cities, namely Ahmedabad, Bengaluru, Kochi, Chennai, Mumbai, Delhi, Guwahati, Agartala, Pune, Visakhapatnam, Lucknow, and Goa.

It will continue to grow its network to establish a strong pan-India presence focusing on the metro to tier 2 & 3 route connectivity, using a fleet expansion plan that adds one new aircraft every 15 days, as part of which the airline recently welcomed its 10th aircraft. Akasa Air’s fleet size will be 18 aircraft by the end of March 2023 and over the next four years, the airline will add 54 additional aircraft, taking its total fleet size to 72 aircraft.