IRCTC (Indian Railway Catering and Tourism Corporation) Tourism has launched a tour package of six nights and seven days to Ladakh, Sham Valley and Nubra Valley. IRCTC Tourism is the tourism arm of the Indian Railways, announced that the tour will start from Delhi via economy class of GoAir. While the tour will be starting on multiple dates, the tariff of the package starts at Rs. 46,430 per person, which is inclusive of taxes, according to IRCTC Tourism’s website. The package includes air tickets (Delhi-Leh-Delhi round trip), accommodation in hotel rooms, entrance/monument fees as per the itinerary, breakfast, lunch and dinner according to IRCTC’s website. The package also offers travel insurance for passengers.

Utilising the free slots vacated by Jet Airways, Air Asia India is all set to expand its capacity after commencement of additional flights from the Delhi airport effective May 20. The low-cost airline will launch additional flights to Indore, Bagdogra, Hyderabad and Ranchi from Delhi. The fares will start from Rs 3,079. The flight I5 752 will depart at 05:35 from Delhi and arrive at 07:05 in Indore while flying back at 07:35 and reaching Delhi by 08:55. The I5 744 flight to Ranchi will depart at 09:35 and reach the destination by 11:15. It will fly back to Delhi on 11:45 and reach at 13:50. The Delhi to Bagdogra flight I5 756 will fly at 14:30 and reach the destination by 16:40 while I5 757 will fly back to Delhi on 17:10 and reach by 19:20 . The Delhi-Hyderabad flight will take off at 19:50 and reach Hyderabad by 22:10 and it fly back to Delhi at 22:50 and reach Delhi by 1:00. The airline inducted its 20th aircraft in February and is now eligible to fly overseas, prior to necessary approval from DGCA.

GoAir in a statement has said that ahead of rainy season in Maldives, the airline has decided to curtail flight operations to Velana International Airport, Male for the period between July – October 2019. “Across the world airlines operate leisure destinations on the basis of seasonality and load factors. Post that, GoAir management team will take a call and resume flights.” GoAir spokesperson said. 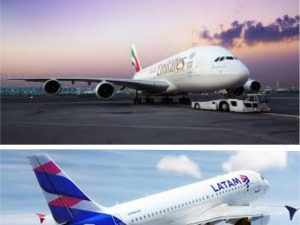 Emirates and Latam Airlines have entered a new codeshare partnership agreement with Latam Airlines Brazil, under which it would cover domestic services in Brazil. Emirates passengers travelling to and from Brazil will now be able to connect with 17 cities in Latam’s domestic network covered by the codeshare agreement including Belo Horizonte, Brasília and Foz do Iguaçu. Passengers travelling to/from these cities will now be able to connect seamlessly in São Paulo and Rio de Janeiro with Emirates’ flights to its Dubai hub, which serves over 150 destinations worldwide. Under the deal, Emirates passengers get more choice to travel to/from Brazil with minimum connection times to destinations in Emirates’ global network such as Japan, Australia and India amongst others. “We’re pleased to establish a partnership with Latam Airlines Brazil, providing our passengers with increased choice, flexibility and ease of connection to different cities within Brazil. We continuously invest in providing more benefits to our customers. With our award-winning product and strong partners in Brazil, we look forward to continue supporting the country’s growing inbound tourist numbers and business trade opportunities,” said Adnan Kazim, Emirates’ divisional senior vice president, Strategic Planning, Revenue Optimisation and Aeropolitical Affairs. 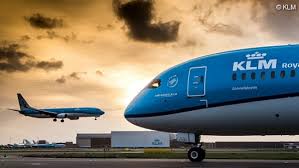 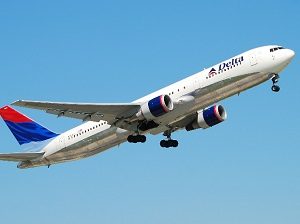 US carrier Delta Airlines has announced non-stop direct daily flights between Mumbai and New York’s John F Kennedy International Airport from December 22, becoming the second carrier and only U.S. carrier to offer the JFK-Mumbai route. At present, only Air India provides direct daily service on this route. The US-based carrier is restarting services on this route after a decade. The airline previously offered service between the U.S. and Mumbai from 2006 to 2009. The JFK-Mumbai route will operate year-round on a newly renovated Boeing 777-200LR, leaving from JFK at 9:15 p.m. and arriving at Chhatrapati Shivaji International Airport in Mumbai at 10:50 p.m. the next day — a roughly 16-hour flight. The return flight to the U.S. will leave Mumbai at 12:50 a.m. and arrive at JFK at 6:35 a.m — just over 15 hours.   “Delta’s nonstop service between New York and Mumbai is the latest example of our international growth as we strive to connect the world better than any other airline,” said Ed Bastian, Delta’s Chief Executive Officer. “This route would not be possible without the administration’s ongoing efforts to enforce fair competition in international travel, ensuring that consumers enjoy a wide range of choices as they travel the globe.”   The airline did not announce when travelers could begin booking the flights nor how frequently they would operate.   The aircraft features the Delta One Suite — an all-suite business class cabin — as well as the premium economy offering Delta Premium Select have seatback entertainment. The flight will also offer WiFi connectivity and free mobile messaging. The new service will become Delta’s second-longest flight.

AirAsia to add 13 new aircraft in India this year 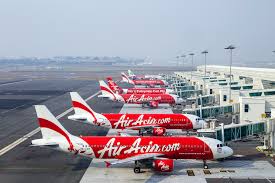 AirAsia Group has reported that it has plans to add 13 new aircraft to its fleet during 2019 in India. Adding more to its fleet, Indonesia will get five, Philippines will get three and Malaysia, Japan and Thailand will get one aircraft each. India is a strategic market for AirAsia and the airline will soon start its Ahmedabad-Bangkok direct flight from May 31. AirAsia Thailand has recorded a positive load factor of up to 87 percent on its India routes, with guests travelling between Bangkok and existing destinations in India increasing 7% on-year, translating into economic benefits for both countries. (Source: CAPA)

IndiGo delays its 2nd daily Delhi-Istanbul flight to July 1, instead of May 1. Right now, there is one daily service between the two cities with one hour layover in Doha.  The closure of Pakistan airspace has affected hundreds of flight operations worldwide. Most of the restrictions implemented in February remain in place. IndiGo now holds the maximum share in the Indian aviation sector (44%) and is trying to fill in the empty slots by Jet Airways, which recently has suspended its international and domestic operations until further notice.

According to a report by IATA, the ‘Current trends’ scenario predicts that 44% of additional air passenger trips over the next 20 years will come from China and India alone. The report also elucidates that air travel markets are reaching maturity in most developed economies. The rise in the frequency of air travel of the average citizen – which underlies the expected growth in air passenger demand over the next 20 years – will occur mainly in the world’s emerging markets. So, the average citizen in Europe and the US is not expected to fly much more frequently in 20 years’ time than they do today, even though their living standards are forecast to be 20-30% higher in our ‘Current trends’ scenario. Moreover, in developed economies like Germany there is very little population growth – another key driver of air passenger demand – expected either. But in the emerging markets there is expected to be a strong demand to connect cities by air services for trade, investment and travel. This is where both the frequency of travel and populations are expected to rise most.

Biman Bangladesh to resume direct Dhaka-Delhi operations from May 13 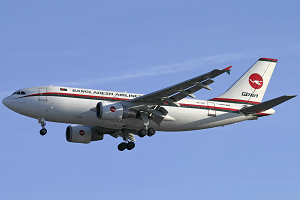 Biman Bangladesh Airlines is all set to restart direct ﬂights between Dhaka and Delhi from May 13. To promote the relaunch, Biman has announced 15 percent discount on the existing base fare on the route, which be valid till May 30. With this flight, Biman will become the only airline to operate direct ﬂights between the capital cities of the two countries. Initially, Biman will operate three ﬂights every week on Monday, Thursday and Saturday. The ﬂight from Delhi, BG 098 will depart at 6:20 pm (IST) and will reach Dhaka at 9:20 pm (local time). The return ﬂight BG 097 will take oﬀ from Dhaka for Delhi at 3:00 pm. The national ﬂag carrier of Bangladesh will use Boeing 737-800 aircraft with a conﬁguration of 12 Business class and 150 Economy class seats on this route. InterGlobe Air Transport Limited (IGAT) serves as the exclusive GSA for Biman Bangladesh in India. The airline also runs ﬂights to 15 international destinations (Kuwait, Abu Dhabi, Muscat, Riyadh, London, Dubai, Jeddah, Doha, Dammam, Kolkata, Kathmandu, Yangon, Singapore, Kuala Lumpur and Bangkok) and a well-knit seven domestic stations with a younger ﬂeet of 13 aircraft including Boeing 787 Dreamliner.