Emirates announces dates for its next cricket tournament 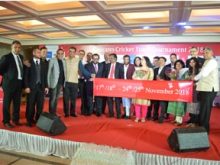 Continuing with its agenda to inspire the spirit of sportsmanship among the travel trade, Emirates Airlines will organise the third edition of its ‘Emirates Cricket Trade Tournament 2018’ for the travel trade in November in Mumbai. The League matches will be held on November 17-18, 2018 and the semi-final and final matches will be on November 24-25, 2018 at Islam Gymkhana. The cricket trophy was also unveiled in a pre-event networking event where it invited all the team members.
Essa Sulaiman Ahmad, VP-India & Nepal, Emirates, was present at the networking party and wished the players all the best. The matches will be powered by DTCM, Amadeus and Reckon Travels & Holidays. The previous edition played in 2016 had 416 players in 32 teams playing 45 games over four days over two weekends.