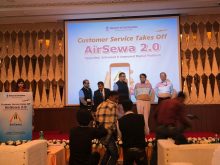 Union Minister of Civil Aviation Suresh Prabhu and Minister of State for Civil Aviation Jayant Sinha have launched an upgraded version of AirSewa web portal and mobile app. The Ministry of Civil Aviation had earlier launched AirSewa web portal and mobile app in 2016 to address issues like flight delays, problem in refunds, long queues, inadequate facilities at airports and complaints of lost baggage by air passengers.
Speaking during the launch, Prabhu said, “I would like to congratulate all the stakeholders for the launch of upgraded web portal and app of Air sewa. In a matter of few more months, we’ll be launching another upgrade for the same.”
Sinha said, “AirSewa 2.0 upgrade came after two years of initial launch. And, I would like to thank and support all the stakeholders in the ecosystem as this wouldn’t have been possible without the support.”
The upgraded and improved version of AirSewa operates through an interactive web portal as well as through a mobile app for both android and iOS platforms, and will offer people a convenient and hassle-free air travel experience. With around 30,00 app downloads and 75,000 web portal hits, AirSewa 1.0 was received well and helped significant number of air passengers to get their concerns resolved. The ministry felt the need for development of an upgraded version of AirSewa to provide a superior user experience with enhanced functionalities including features like secure sign-up and login with social media, chatbot for travellers’ support, improved grievance mangement, including social media grievances, real-time flight status and detailed flight schedule.