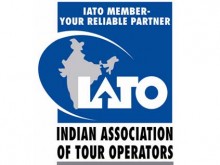 The Indian Association of Tour Operators took its members for a Fam tour to Orchha Palace and Convention Centre. The new property opened its doors to the IATO members before its formal opening on October 1, 2016, and showcased its various offerings to the tour operators. The two day tour saw the members experiencing the facilities at the property and sightseeing of the historical city of Orccha. The property is owned by Ashok Jain, MD, Orchha Palace and Convention Centre, who also owns Orchha Resort in the same region.