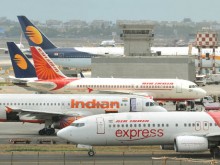 To promote airlines to extend their service to Kerala, the Kerala government has decided to slash the tax on aviation fuel to 5 per cent from the current 28.75 per cent for domestic airlines. Making the announcement in the assembly during the discussion on the state budget for 2019-20, state’s Finance Minister TM Thomas Issac said that not only airports under the UDAN scheme but also non-UDAN airports would get the new tax breather in the state. “The tax on ATF will be reduced to 5 per cent from the existing 28.75 per cent for domestic airlines operating service from the state airports. A revenue loss of Rs 100 crore is expected through this,” he said.
The tax cut is expected to benefit Thiruvananthapuram, Kochi and Kozhikode international airports as the government had already decided to levy only 1 per cent fuel tax from airlines operating service from the newly commissioned Kannur airport. Aviation fuel accounts for a major portion of operating cost for airlines. The tax cut can help become Kerala an attractive destination for various airlines as neighboring states like Tamil Nadu and Karnataka are charging a state tax of 29 and 28 per cent, respectively on jet fuel. The tax cut benefits would benefit only domestic passengers as the international airlines that operate to and from the state have not been charging VAT as per the new GST regime.