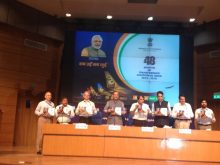 The Ministry of Civil Aviation has revealed its initiatives and achievements in the last four years at a press conference, where Suresh Prabhu, Minister of Civil Aviation, said that the aviation sector in India has reached new heights in the last four years. “In the last four years, we have thoroughly transformed the aviation sector and India has emerged as the third largest domestic aviation market. The connectivity has improved and flying has become affordable for every Indian. This started with the launch of Nationla Civil Aviation Policy in 2016, followed by the highly successful UDAN (Ude Desh ka Aam Nagrik) scheme, under which air services have started at 30 additional airports. The airlines in the country have ordered 900 new aircraft under different categories. We are working to increase our system capacity threefold in the next 10-15 years through the NABH (Next Generation Airports for Bharat) Nirman capacity expansion programme. Apart from that we will release new Cargo Policy in the near future along with working on the Make-in-India and Drone Task Forces. We hope to take this sector to new heights.” Also present at the conference were Jayant Sinha, Minister of State, Civil Aviation; RN Choubey, Secretary, Ministry of Civil Aviation, along with senior officials from Airport Authority of India (AAI); DGCA, Air India and Pawan Hans.