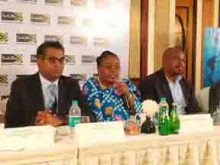 In a bid to stimulate the India market and achieve its new milestone of doubling numbers by 2030, South Africa has announced an e-visa regime for the India market on a pilot basis. Mmamoloko Kubayi-Ngubane, Hon. Minister of Tourism, South Africa, who was in Mumbai to interact with key travel trade partners said, “We want to remove the barriers for the India market to visit South Africa and for this we will introduce an online visa application system from the third week of January this year. This will be on a pilot basis for now and we will look at introducing it formally by April this year.” About 32 key agents attending the morning session where they discussed ideas on how they can push numbers from India.