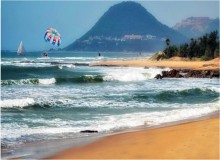 In a bid to attract more tourists to its shores, Andhra Pradesh has launched a host of water sports and adventure tourism facilities. In line with the surge in tourist interest in water sport activities, the state has already introduced a plethora of such facilitates for example parasailing, jeep parasailing, para-motoring, water skiing, speed boat etc. in Bhavani Islands in Vijayawada. Work is also well underway to replicate the same across other key beaches such as Rishikonda, Bheemili, Mangamaripeta, Thotlakonda, among others. Also, two houseboats have been launched with one and three bedroom capacities respectively in the popular tourist destination of Papikondalu in Rajahmundry. To strengthen the tourism development in the state, Andhra Pradesh is also launching 33 hotels offering more than 2766 rooms and with a total investment of Rs. 2400 Cr. Notable global brands such as Taj group, ITC group, Accor group Holiday Inn Associates and JW Marriot Associates etc. has already invested in such projects. Tourism in Andhra Pradesh is also geared up to add a new feather in its cap with the launch of amphibious vehicles in Vijayawada and Rajahmundry. These special kinds of vehicles which can operate on both land and water will give visitors an unforgettable experience. Encouraging Heli tourism, the state is also coming up with sea planes to be functional in Vishakhapatnam, Vijayawada and Kakinada. In Vizag, one of such helicopters will be operated from one of the most prominent tourist attractions of Kailasagiri Hills. Site for setting up sea plane jetty has been identified in all the destinations and currently design work is underway. Neerabh Kumar Prasad, I.A.S., Principal Secretary to Government, Tourism & Culture, said “We are extremely proud to announce the launch of a host of water sport and adventure tourism facilities in Andhra Pradesh. This launch will herald a new dimension in tourism in the state.”
“Sport and adventure are the two most integral parts of youth life and these facilities will have a strong appeal to come and enjoy a memorable experience in the state.” he added. R.P. Khajuria, I.F.S., Commissioner, Department of Tourism said “Amphibious vehicles and Heli tourism are two most contemporary forms of tourism attractions. We plan to launch them soon and are really upbeat about it. Overall with the launch of these hosts of water sport and adventure tourism activities, we feel tourism in the state will get a major boost.”
For patrons of adventure tourism, the stage is set to take their experience to a new height with the launch of facilities such as waterfall rappelling, rock climbing, high rope courses, zorbing etc. in popular hill stations of Horsley Hills, Puligundu and Talakona.