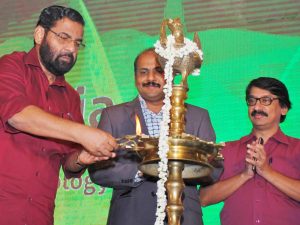 Sensing the immense and innumerable possibilities of promoting Kerala as a destination for ‘Adventure and Activity based Tourism’, the State Tourism Department is focusing on developing new projects to utilise the same, said Tourism Minister Kadakampally Surendran. Inaugurating a one day workshop organised by the department to give shape to its tourism policy, the Minister said that the need and time has come for the tourism department to evolve itself to cater to the needs of activity and adventure based tourism from now on. While the primary focus at the workshop had been to find new possibilities to take adventure tourism forward in the state, the minister stressed on the need to work closely and in coordination with the Forest Department to realise the goals in the adventure tourism sector. Kerala Tourism is currently planning to re-brand itself and find new avenues to take the sector forward in order to double the tourist arrivals by 2021. Keeping this in mind the department will now start a new ‘Tourist Circuit’ based out of North Kerala and will shift focus from areas it had been concentrating all this while to specifically give thrust to Adventure Tourism with the sole aim of attracting more youngsters to the state. Reiterating the commitment to responsible tourism the minister said that the state government has a definite stand in this regard which will be part of the Tourism Policy that the government will table at upcoming session of the state assembly. Environmental protection and raising the standard of living among the local population are the two primary objectives that the government will focus on as part of responsible tourism. The government will encourage and support new …

India has bagged awards in three categories at the PATA Gold Awards 2017 scheduled to take place in Macao SAR on September 15 during PATA Travel Mart 2017. The Ministry of Tourism, Govt. of India will be honoured under the Marketing Media – Travel Advertisement Print Media category for its Go Beyond project, while Kerala Tourism has secured an award for Marketing Media – Consumer Travel Brochure on Film Tourism. Travel provider Cox & Kings is the other winner for its Social Media marketing project Forever Young. Dr. Mario Hardy, CEO, PATA, said, “On behalf of PATA, I would like to extend our warmest congratulations to all 2017 Grand and Gold Award winners. This is no better time and place to celebrate their accomplishments, than this International Year for Sustainable Tourism for Development in Macao SAR during the 40th Anniversary of PATA Travel Mart. I look forward to celebrating this year’s winners who represent the values of the Association in working towards a more responsible travel and tourism industry in the Asia Pacific region.”

Kerala aiming for double the FTAs, 50% rise in domestic tourists by 2021

The Government of Kerala is looking at 50 per cent increase in the number of domestic tourists and 100  per cent increase in foreign arrivals by 2021, Tourism Minister, Kadakampally Surendran has said. “Digital platforms are the key to achieve the aim. Year after year, we see a constant growth in the number of tourists we host. Hence the industry needs to evolve in accordance with the changes in global market. Kerala Tourism has been exploring new media as a key platform and has witnessed the reach and response to it,” he noted. Dr. Venu V, IAS, Principal Secretary, Kerala Tourism, says, “Kerala Tourism has always been in the forefront as we were the first tourist destination to start a website. Later, we spread our presence to other social media platforms. The technology platforms are gently stronger. Hence we need to redesign and reengineer to cater the demands of guests.” 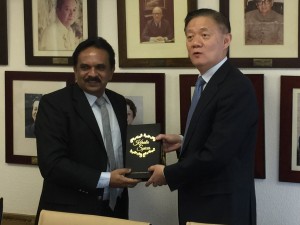 Kerala’s award-winning ‘Responsible Tourism’ (RT) initiatives has come in for further recognition with the United Nations World Tourism Organisation (UNWTO) describing them as a model for other destinations to replicate. The world’s foremost international tourism organisation also called for the development of closer ties between Kerala Tourism and UNWTO, emphasising the importance of further association to help take the message of sustainable tourism forward. In a recent meeting held at UNWTO headquarters in Madrid, Kerala Tourism Director, U.V. Jose presented a report on the RT campaigns – the heart of Kerala’s tourism story for nearly a decade – to Xu Jing, UNWTO Regional Director for Asia and the Pacific. The report contained details of the RT policies and practices implemented in the state and the campaign’s success in giving stakeholdership to local communities and empowering them economically through activities that prioritise cultural and ecological conservation. 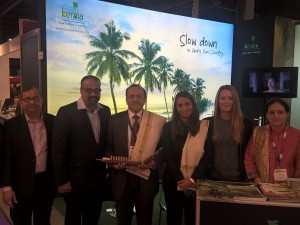 Kerala’s highlights as tourism destination were on full display for the Dutch and other European travelers at the five-day Vakantiebeurs 2017, the biggest tourism trade event in the Netherlands. Laidback cruises on serene backwaters and Ayurveda rejuvenation therapies showcased at the Kerala pavilion grabbed attention and generated several inquiries at Vakantiebeurs 2017, which was held in Utrecht from January 10-15 and drew up to 1,08,000 visitors. The pavilion spread over 18 sq m, marked Kerala Tourism’s first appearance at the trade fair which is held annually in the second week of January in Utrecht and provides a gateway to the Dutch and European markets. For Kerala Tourism, the Netherlands is the 11th biggest originating market with 22,276 tourist arrivals registered during 2015, a 40% increase from 2010. “South India is yet to get as much attention in the Dutch market as the north of the country, and Vakantiebeurs was a chance for us to close the gap,” said Tourism Minister Kadakampally Surendran. “Our promotional campaigns in such prestigious fairs will help Kerala compete not just with north Indian destinations but international ones such as Sri Lanka and Thailand.” Kerala Tourism’s pavilion had the theme ‘Slow Down in God’s Own Country’, a nod to the relaxing and rejuvenating offerings of the state. The Dutch are big-time travellers and are keen to gather more information on new destinations, said Dr Venu V, Principal Secretary, Tourism. “Our pavilion attracted many enquiries which we expect to translate into holiday bookings over the next two years,” he added. Surveys show that of the Dutch people who visited the Vakantiebeurs event, 64% were there to gather information on holidays still to be booked and 54 per …

Along with its successful ‘God’s Own Country’ campaign, Kerala will now be promoted as the ‘Land of the Biennale’ as well, says U.V. Jose, Director, Kerala Tourism. The new moniker comes in line with the Kochi-Muziris Biennale (KMB) by the Government of Kerala, which allocated Rs. 7.5 crore towards operational expenses for the KMB’s ongoing third edition – besides committing to finding India’s only Biennale a permanent venue. “Kerala Tourism has allotted around Rs. 6 crore to promote both the biennale and the state through ad films, national and international road shows and campaigns as well as other initiatives,” Jose said. Noting that the theme of the new campaign would be related to art, he said the Tourism Department had sanctioned Rs 60 lakh for a film to promote Kerala as the land of the Biennale. “For the next three months, over the duration of the Biennale, Kerala Tourism will showcase it at national trade fairs, international road shows and tourism and trade conventions. We will also roll out the ‘Live Inspired’ campaign, which is themed around the inspiration and pride of having the chance to view and experience such top class artworks here,” he added. The Director said that while the state was known for such distinctive offerings as its Ayurveda therapies and houseboats, the Biennale would be added to that list of iconic Kerala products. He noted that there were already links between the Biennale and the Muziris Heritage Project with Kottapuram fort in Kodungallur being one of the 12 venues for KMB 2016. 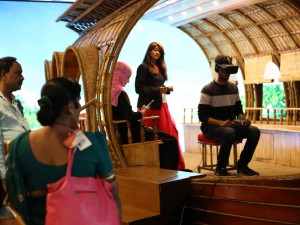 Kerala Tourism has rolled out ‘The Great Backwater Experience’ zone at a special interactive stall in the departure terminal at Indira Gandhi International airport in New Delhi. The initiative uses virtual reality to allow passengers to experience a Kerala experience while waiting to catch their flight. Similar zones are also being set up at airports in Mumbai and Bengaluru. U.V. Jose, Director, Kerala Tourism, said, “The zone is up and functional at Indira Gandhi International airport in New Delhi and visitors can get an immersive experience of sitting inside a ‘kettuvellam’, a traditional Kerala houseboat, floating on tranquil backwaters in a place situated over 2,000 km away. This has been made possible through the innovative use of virtual reality.” 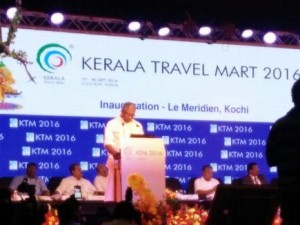 The ninth edition of Kerala Travel Mart (KTM) was inaugurated in the presence of Kerala Chief Minister Pinarayi Vijayan; Suman Billa, Joint Secretary, Ministry of Tourism, Government of India, Abraham George, President, KTM Society, V. Venu Principal Secretary, Kerala Tourism, among other dignitaries at Le Meridien, Kochi. 57 countries besides 20 Indian states are participating during the three-day biennial event, which is being organised by the KTM Society in association with the Department of Tourism, Government of Kerala on September 27, World Tourism Day. Ten countries will be represented at the Mart for the first time, with Mexico, Georgia, Japan, China, Chile, Greece, Iran, South Korea, Saudi Arabia and Botswana. The 560 total international delegates registered for KTM 2016 features the biggest-ever contingents from 10 highly-prized traditional markets, including the US, Canada and Australia. Domestic participation too has seen an uptick, buoyed by aggressive marketing campaigns. Some 1,304 Indian buyers will participate this year. 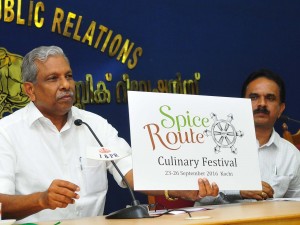 Kerala Tourism is inviting participants for a regional competition for local chefs, the qualification rounds for which will be held from September 1-8. Entries are open to both professional chefs and amateur enthusiasts. Standout contestants – selected by a judging panel of culinary professionals – will compete in the finals at Bolgatty Palace and Resorts in Kochi on the last day of the Spice Route Culinary Festival, which runs from September 23-26. The festival’s highlight is an international competition that will feature chefs from 31 Spice Route nations whipping up dishes representing the cuisine of their home countries, but with a dash of spices from Kerala added in. Speaking at a press conference at the Secretariat, Minister for Tourism, Government of Kerala, A.C. Moideen said, “The culinary festival is a great opportunity to refortify our ancient links with the 31 countries along the historical Spice Route. It will provide a space for exchanging and understanding different cultures and traditions and also help facilitate trade opportunities with these countries.” “The regional competition intends to identify and promote Kerala’s culinary talent. It will showcase both the strength of public participation in Kerala and its fabled cuisine. This worthy initiative will highlight the spirit of people to people links and Kerala’s role as the hub of tourism and trade,” the minister added. The winning entrant and two runners-up will be felicitated during the culinary festival’s valedictory session. All contestants will be issued certificates of participation by Kerala Tourism. Held under the aegis of the Spice Route project, an ambitious initiative by Kerala Tourism in partnership with UNESCO, the Spice Route Culinary Festival is a first-of-its-kind celebration of flavours and friendship that will see … 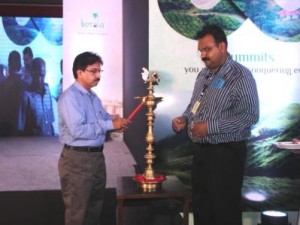 Kerala received 9,77,479 foreign tourists in the year 2015 recording a growth of 5.86 per cent over the previous year’s figure of 9,23,366. Domestic tourists footfall during the same period was 1,24,65,571 with a growth of 6.59 per cent over the previous year’s figure 1,16,95,411. Nandakumar K P, Deputy Director, Kerala Tourism, recently informed at a roadshow held in New Delhi. He also said, “Tourist figures to Kerala have been growing vigorously for the past twenty years. We only saw a little bit of slow down last year and previous year but we are still growing. So, this year we are coming out with a five year action plan to increase footfall. We are going to increase the accommodation facilities and availability and increase the number of classified hotels. We are going to introduce more than 1000 home stays also. We are also going to tap new international markets like the Eastern Europe which is an emerging market for us.” He also informs that the state aims to add 5,00,000 more employment opportunities in the tourism sector in the next five years.