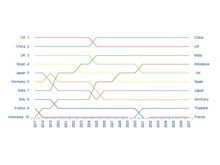 India is set to become the third largest air passenger market, surpassing the UK around 2024, according to a recent study by IATA’s ‘20-Year Air Passenger Forecast’. The International Air Transport Association (IATA) revealed that present trends in air transport suggest passenger numbers could double to 8.2 billion in 2037. Over the next two decades, the forecast anticipates a 3.5% compound annual growth rate (CAGR), leading to a doubling in passenger numbers from today’s levels. The Asia-Pacific region will drive the biggest growth with more than half the total number of new passengers over the next 20 years coming from these markets. Growth in this market is being driven by a combination of continued robust economic growth, improvements in household incomes and favorable population and demographic profiles.
“Aviation is growing, and that is generating huge benefits for the world. A doubling of air passengers in the next 20 years could support 100 million jobs globally. There are two important things that stand out about this year’s forecast. Firstly, we are seeing a geographical reshuffling of world air traffic to the East. And secondly, we foresee a significant negative impact on the growth and benefits of aviation if tough and restrictive protectionist measures are implemented,” said Alexandre de Juniac, Director General and CEO, IATA.