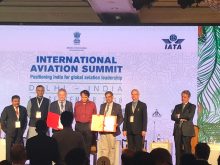 The International Air Transport Association (IATA), at International Aviation Summit held in Delhi, called on the government of India to maximise the potential contribution of aviation to India’s development by addressing infrastructure constraints that limit growth and government policies that impose excessive costs on aviation. Growth forecasts for India indicate a trebling of passenger demand by 2037 when some 500 million people are expected to fly to, from or within India. Already aviation supports 7.5 million Indian jobs and Rs 30 billion of GDP (1.5% of the economy). The Summit, being co-hosted by the Indian Ministry of Civil Aviation (MoCA), Airports Authority India (AAI) and IATA, commemorates the approaching milestone of 50-straight months of double digit domestic growth for Indian aviation.
“While it is easy to find Indian passengers who want to fly, it’s very difficult for airlines to make money in this market. India’s social and economic development needs airlines to be able to profitably accommodate growing demand. We must address infrastructure constraints that limit growth and government policies that deviate from global standards and drive up the cost of connectivity,” said Alexandre de Juniac, Director General and CEO, IATA.
India’s aviation infrastructure has benefitted from significant upgrades in recent years. “It is clear that India has the capacity to develop effective infrastructure. But the job is not done. Passenger numbers will grow. And infrastructure must not be a bottleneck in fulfilling the needs of travelers and the economy,” said de Juniac who called for work in four priority areas – develop a comprehensive and strategic master plan for India’s airports, remove all obstacles to successfully opening Navi Mumbai as quickly as possible, modernise airport processes using technology in line with global standards and flexibly use military airspace to expand airspace capacity for civil operations.