IndiGo expected to get aggressive in 2018-19 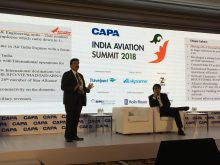 Sharing CAPA’s forecast for 2018-19 during the Annual CAPA India Aviation Summit 2018 held in Mumbai,  Kapil Kaul, CEO & Director—South Asia, CAPA revealed some key expectations from IndiGo. He said, “IndiGo’s long-haul expansion will be aggressive and akin to a full service carrier. It will dominate the low cost carrier market which may cause some sort of friction between airlines. IndiGo may also build cross-border joint ventures but it depends on what happens with its plans for Air India, since IndiGo is one of the six possible bidders for the national carrier. IndiGo may also look at franchise as part of its cross-border plans.” Kaul added that while there might be four Indian carriers to bid for investing in Air India, there might also be two non-aviation entities and huge corporates.