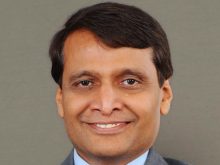 Commerce and Industries minister Suresh Prabhu has been given additional charge of the Civil Aviation Ministry, a day after the resignation of TDP’s Ashok Gajapathi Raju was accepted by President Ram Nath Kovind, a Rashtrapati Bhavan spokesperson said. In a brief communique, the spokesperson said, “The President, as advised by the Prime Minister, has directed that Suresh Prabhu, Cabinet Minister, shall be assigned the charge of the Ministry of Civil Aviation, in addition to his existing portfolio.”
Raju and another Telugu Desam Party (TDP) MP Y S Chowdary had resigned from the council of ministers after party supremo and Andhra Pradesh Chief Minister N Chandrababu Naidu decided to pull out his ministers. Naidu took the decision after facing relentless attacks from the opposition for “failing” to secure special category status for Andhra Pradesh.